Treloar’s is thrilled to announce that both Dan Eley and Jane Macnabb have agreed to become Patrons of the charity.

Dan Eley is Chief Executive of The Dan Eley Foundation. He worked as a charity worker with impoverished children in Latin America for two years before a diving accident in the Colombian Amazon left him paralysed from the shoulders down on New Year’s Day 2010.

Dan spent the next year in hospital, fighting for his life and facing up to the enormous emotional and physical challenges of being so severely paralysed. During these difficult times he had the opportunity to meet other people with similar disabilities who had overcome extreme adversity to go on and achieve great things in life. This inspired him to pursue his dream of starting apprenticeship-style training schemes for children living in poverty in Colombia and Latin America.

“It is a huge honour and a privilege to be invited to become a Treloar’s Patron and I am delighted to accept.” Dan Eley.

Jane Macnabb is Chair of the Friends of Treloar’s and has personally contributed to Charity firstly as a Friend of Treloar’s and then as Chair. This team of special people work tirelessly behind the scenes assisting students in class, packing our Christmas orders and helping out at our events. Treloar’s could not manage without their continuing support.

Both Dan and Jane will be extremely valuable additions to the current credible list of Patrons at Treloar’s which include our Royal Patron, HRH The Countess of Wessex GCVO. The role of our Patrons is so important – endorsing our work as a reputable charity, inspiring our students, raising awareness of the Charity and encouraging others to contribute essential funds.

We very much look forward to working with both Dan and Jane in the future. 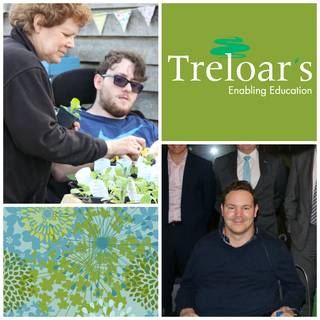