The Heathcoat Cup is an exciting Boccia competition for all impairment groups, and a favourite for us.  Students from Treloar’s took part in the Crawley regional event this week, just one of many across the country, with the qualifiers at this stage competing in the Heathcoat Cup finals in Nottingham in April.

11 students from School and College, all BC3 classification (ramp players), attended the competition on the 10th March.  Most of the students were taking part in the Heathcoat Cup for the very first time.  In the past we have only been able to take 4 BC3 athletes due to only owning 4 Boccia ramps.  Thanks to generous donations we have been able to purchase 13 ramps which have enabled so many more students to enjoy Boccia and take part in external competitions.

Students Sophie, Arlo , Dom , Sally , Josh , Rachel , Joe , Phoebe , Bex, Lloyd and Marc all competed in the BC3 category with Sophie, Sally, Josh and Marc progressing through to the Quarter finals.  Sophie and Marc were knocked out at this stage but Josh and Sally went on to compete in the semi-finals.  Josh lost his match and was then playing for 3rd/4th place and the chance of a bronze medal.  Unfortunately, after a well fought match, Josh finished in 4th place.

Sally won her Semi-final and was now playing for top spot in the final. After a very exciting match, Sally won 5.1 and took the gold medal.

Everyone played incredibly well and we were very proud of all our students.   And good luck to Sally who will be competing in the Finals next month! 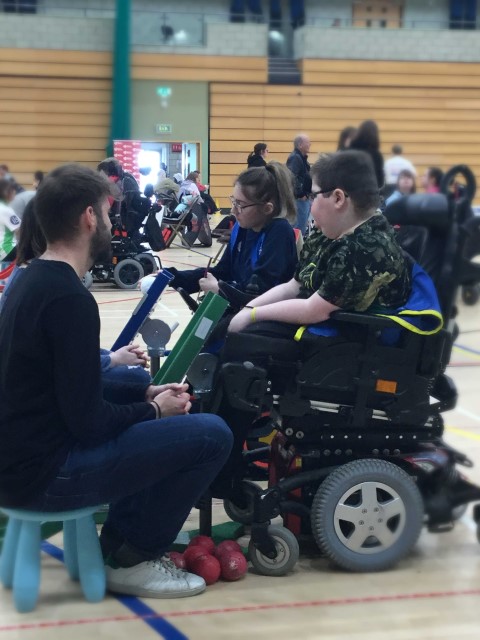