Alastair and Jessica Taplin, the Trust’s CEO, opened the evening in conversation. Articulate, informed and with much passion they discussed the opportunities and challenges facing young people with physical disabilities, particularly in such times of austerity and uncertainty. They raised the question of what more can be achieved as a collective, and the importance of raising awareness and finding shared solutions for the many difficulties facing younger wheelchair users as they transition into work, independent or supported living.

With humour and confidence Alex Taylor shared his journey on the challenges of becoming a journalist with cerebral palsy, from the overnight shifts, finding a mentor at the NME to most recently the interview that secured him his role at the BBC.  Last year he released a BBC Newsbeat documentary Access all Areas; a look at what it’s like raving in a wheelchair on the party island of Ibiza and he discussed the subsequent changes his campaign helped bring about for wheelchair users.

Reverend Mark Birch, Minor Canon & Sacrist, spoke about his role at Westminster Abbey.  He organises many of their special services, not least the Service of Thanksgiving for Stephen Hawking. Mark has close ties to Treloar’s, having been Chaplain for many years, and he shared his thoughts on working alongside young people with complex disabilities , notably stating “Treloar’s students are not mere objects of charity, they are teachers in the school of being human – a school of rich diversity where we all might learn and flourish.”

Former student, Paralympian and youngest ever Boccia World Champion David Smith, delivered a brilliantly well-timed vlog – challenging the audience to think about success and what it really meant to them. The final speaker of the evening was Treloar’s Parent, former Parent Governor and chair of the Parents Association, Anne Edward. Anne’s son Alessandro attends Treloar College. With great frankness and openness she shared why she chooses to view the glass as half full, not half empty. Following the advice from a paediatrician not to focus on the diagnosis but on their son, she described how this has allowed their family to enjoy countless happy experiences together.  As Alessandro prepares to leave Treloar’s this summer for a future involving one of his passions – music – she thanked everyone at Treloar’s who has supported him.

Treloar’s Event Manager, Laura Toop, commented: “It was an inspiring evening, showcasing how hope, humility and humour can overcome the toughest of challenges. We are grateful to our supporters and to the Worshipful Company of Glaziers – but most importantly, to our utterly brilliant students and alumni who inspire us every day.” 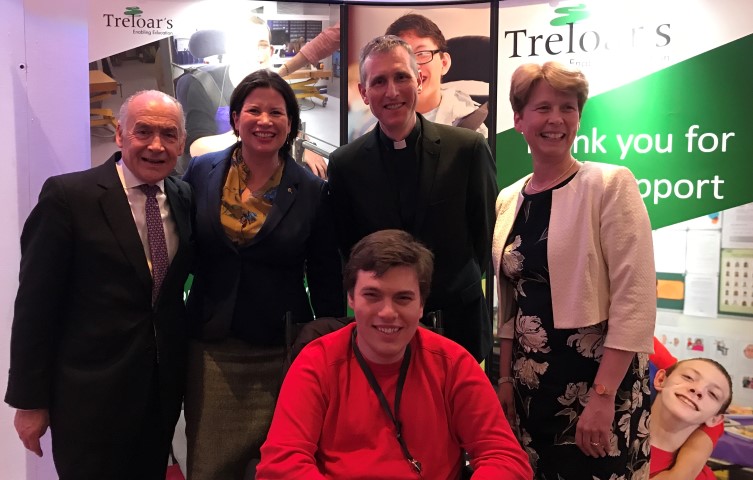